While often labeled as a “bad” habit, drinking coffee is one of the most common daily rituals among people across the globe. I’ve personally been an avid coffee drinker for decades. I typically start most days with 1-2 cups of freshly ground French pressed coffee. Occassionally, I even enjoy an additional semi-sweetened decaffeinated cup of coffee as a post-meal dessert.

Due to my intermittent fasting regimen, I rarely, if ever, go without drinking coffee. I even enjoyed my daily coffee while pregnant with both my sons. While this might seem a bit unorthodox to some, coffee actually houses a ton of health-promoting nutrients.

In fact, the tocopherols in coffee naturally help lower high cholesterol in ways that support heart health while the chlorogenic acid it contains has been shown to regulate blood sugar and insulin (the hormone that lowers blood sugar) levels, which is beneficial in the prevention and management of diabetes.

The Not So Good Stuff

Now, I’d be remiss if I didn’t reference the potential downsides of drinking coffee, most of which are related to its caffeine content and general preparation style.

In and of itself, caffeine can be quite habit-forming, particularly when consumed in excess.

Potential effects of caffeine intake (or withdrawal) can include insomnia, irritability, headaches, anxiety, and difficulty concentrating. In addition, excess consumption of caffeine (more than six cups of coffee a day) may also cause bone loss bone, which greatly increases the risk for fracture.

But, on the flip side, the stimulatory properties of moderate caffeine consumption can greatly increase your metabolic rate. This is a huge plus for weight loss seekers! The higher your metabolic rate, the more calories you’ll burn at rest and during everyday physical activities.

This is one of my reasons for regularly drinking a cup of coffee just prior to working out. Believe it or not, a single cup can keep the metabolic rate elevated for up to 3 hours after consumption. Caffeine is also naturally thermogenic, which essentially means that it boosts your body’s ability to burn fat in a way that further supports weight loss and long-term weight control.

In reference to downsides, there’s also the issue of ‘unfiltered’ versus ‘filtered’ coffee.

Unfiltered coffee is essentially any brew in which coffee grounds come into prolonged contact with hot water. These brews include espresso and French pressed coffee. On the other hand, ‘filtered’ coffee is the traditional American style in which hot water quickly passes through ground coffee in either a paper or a metal filter.

A handful of studies have linked unfiltered coffee consumption to an increased risk of heart disease. This is due to the presence of cafestol and kahweol in unfiltered brews. Notably, these compounds have been associated with elevated cholesterol in people with already high cholesterol levels.

However, it’s important to understand that ‘association’ does not always imply causation.

Additionally, the results of these studies imply that heart disease risk only increases when a minimum of six cups of unfiltered coffee is consumed daily.

So, honestly, there’s really no reason to forgo your lattes, cappuccinos or espresso shots. As always, just be mindful of your intake. Though French press coffee is one of my go-to styles, I’m not being biased here. On my worst day, I can’t drink more than three cups.

On the brighter side, unfiltered coffee consumption comes with an added benefit. It actually has the richest content of methylpyridinium, a compound known to have potent anti-cancer effects.

At the end of the day, whether you enjoy unfiltered or filtered brews, there are clear health benefits associated with drinking coffee. These benefits far outweigh any potential risks.

You can avoid the risks associated with excess caffeine by simply limiting your consumption to more than 400 mg per day, as recommended by the Food and Drug Administration (FDA). That equates to drinking about 3-5 cups of coffee a day. You might also find it beneficial to opt for lower doses of caffeine in the forms of decaffeinated coffee, high-quality coffee substitutes or even teas, as these have proven health benefits as well. 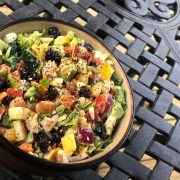