These days, it seems like there’s always some new “magic bullet” or weight loss secret everybody’s talking about. This holds especially true when it comes to food and nutrition practices. Whether be it diets involving severe calorie restriction, very low-carbohydrate eating or excessive detoxing and cleansing, just about everything has in some way been endorsed through commercial advertisements, celebrities, and general hearsay.

But, trendy diets aside, there are numerous myths and misconceptions about food, nutrition and weight loss that are not so extreme. Unlike the more popularized trends, these are often endorsed by physicians, nutritionists and other credible health experts, and, therefore, more likely to be taken at face value.

As a health coach and scientist with expertise grounded in nutrition, I’ll be the first to admit that there’s no “perfect” diet plan that works for everyone. This is precisely why I always strive to separate myths and misconceptions from facts when it comes to the more widely touted ‘rules’ related to food, nutrition and weight loss. Here are three of the most common you’ve likely encountered along with some key facts to debunk them.

Myth: Breakfast is the most important meal when trying to lose weight.

Breakfast is presumed to be the most essential meal of the day, but this assumption has never been clearly proven, as much of the evidence surrounding its value is inconclusive and contradictory. Observational studies have emphasized the importance of breakfast for sustained weight loss suggesting that not eating in the morning can lead to muscle wasting, slow the metabolic rate (the rate at which you burn calories), and increase the likelihood of overeating throughout the day.

Unfortunately, such conclusions have been largely based on loose associations and no direct cause-and-effect relationships have ever been established. Eating breakfast could very well beneficially influence weight loss in some way or another—But, an ever-growing body of evidence suggests that the same effects can easily be achieved by skipping it.

Contrary to popular belief, skipping breakfast does not inhibit weight loss nor does it promote reductions in metabolism so long as sufficient amounts of macronutrients and micronutrients are consumed throughout the day. In fact, breakfast skipping has actually been shown to encourage safe and effective weight loss. In general, fat burning is most intense in the morning after an overnight fast. During this time the body is essentially feasting on stored fat, which is an ideal situation for weight loss.

Since the body will continue to use stored fat until the overnight fast is broken, eliminating the morning meal, thereby prolonging the fast, can greatly maximize fat burning and ultimately weight loss. Delaying breakfast by even a few hours can make a real difference.

While there’s nothing inherently wrong with the idea of eating 3-5 or even 4-6 small meals each day, this type of eating regimen isn’t at all mandatory for weight loss success. The concept of eating such a fixed number of meals originated from studies suggesting that irregular eating patterns have adverse effects on blood glucose (sugar) and insulin, the hormone responsible for lowering blood glucose.

While this holds true for people with metabolic disorders such as diabetes mellitus, it is definitely not the case for individuals who are generally healthy. In the absence of a meal, blood glucose levels are well-maintained by breaking down glycogen, which is the stored form of glucose housed in the liver and muscle. In fact, the average person can hold in excess of 2,000 calories of stored glycogen.

Related Article: A Beginner’s Guide to Intermittent Fasting: What It Is and Why It Works

Fact: Weight loss can be achieved by eating as little as one meal a day.

It has been evidenced time and time again that you can eat anywhere from one to seven meals a day so long as you’re obtaining adequate amounts of macronutrients and micronutrients while meeting, but not overshooting, your daily calorie needs. While some people are alarmed by the notion of glycogen being broken down for energy in the absence of a meal, this is nothing at all to be worried about among individuals who are healthy.

Glycogen stores are often depleted during prolonged or intense bouts of exercise. In truth, skipping certain meals can actually improve insulin’s ability to store greater amounts of blood glucose as liver and muscle glycogen. This greatly reduces the likelihood of fat storage, especially in the abdominal (belly) area, and can thereby enhance weight loss.

The notion that eating late causes weight gain is one of the most commonly spread weight loss myths. Now, I will say that eating 2-3 hours prior to bedtime has been shown to support increased fat burning during sleep. But, this doesn’t necessarily mean you’ll gain weight from eating later than that. Weight gain is largely dependent on calorie intake relative to overall calorie expenditure. Therefore, regardless of when food is consumed, eating more calories than expended will lead to weight gain.

Furthermore, to suggest that eating late is in any way bad is to assume that everyone operates on the same stereotypical clock. For someone like a nurse or a bus driver working the overnight (twilight) shift, a ‘late’ meal may serve as ‘breakfast’ or ‘lunch’. Everyone has different schedules and lifestyles. For the many people who sleep during the day and work through the night trying not eating late isn’t realistic nor is it necessary.

There is a bit of truth surrounding the notion of eating late, but this is more related to the quality of foods people tend to consume during the wee hours of the morning like pizza, chips, candy, ice cream and alcoholic beverages, all of which are calorie dense. It’s important to understand that taking in any extra calories above what your body needs in a day can lead to fat storage and ultimately weight gain. But, whatever is consumed late is only considered ‘excess’ if it’s in excess of your calorie needs.

That being said, if you find yourself mindlessly snacking on chips or ice cream while working, studying or watching your favorite late-night television lineup, you might find it helpful to simply refrain from doing so in order to avoid unwanted weight gain.

Now, I didn’t write this article to suggest that believing the commonly held myths and misconceptions I’ve highlighted is inherently a bad thing. In fact, if following any of these widely touted ‘rules’ has effectively helped you lose weight, then by all means, don’t change a thing!

Point is, what works for you may not necessarily work for others, and vice versa.

Again, when it comes to weight loss, there’s no “perfect” diet plan that works for everyone.

Contrary to popular belief, it doesn’t matter how many meals you eat in one day, what time of day you eat them, or even how small or large your meals are. Everyone has different food preferences, schedules and lifestyles. At the end of the day, when it comes to food, nutrition and weight loss, what ultimately matters most is your total nutrient intake and diet quality over the course of the day.

3 Simple Ways to Get Rid of Jiggly, Wiggly Arms

Mercury in Seafood: What to Eat and What Not to Eat

Intermittent Fasting: How I Control My Weight By Eating One Meal a Day 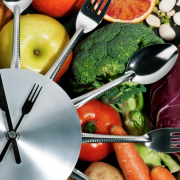 A Beginner’s Guide to Intermittent Fasting: What It Is and Why It Works