Belly fat is one of the most common sources of frustration for weight loss seekers, especially women. Indeed, during every lecture, seminar and workshop I’ve ever given for an audience of women at least one raises the question of how to lose belly fat, only to take my planned talk into an entirely different direction.

The typical conversation flow is as follows:

Woman: “How do I get rid of this?”—As she points to her midsection.

Me: “With exercise and sensible eating habits.”

This correspondence generally kicks off a very lively discussion on why belly fat suddenly appears at or around the 40-year mark and why it’s so hard to get rid of after that.

Eyes and ears open when I emphasize one simple fact: As women approach the age of 40 we will naturally accumulate excess body fat in the midsection. And, this increase in belly fat is linked to three changes that we as women will all experience as we approach our menopausal years:

I’ll break each of these down in the following paragraphs.

In our early childbearing years, the female sex hormone estrogen predominates. This hormone inherently promotes body fat accumulation in the lower half, particularly around the hips and thighs making us generally appear more pear-shaped, compared to our male counterparts.

Related Article: What It Means to Have a Pear-Shaped Body

Now, as we age and approach menopause, our estrogen levels begin to decline causing more of a predominance of testosterone, which is the dominant male sex hormone.

Testosterone is responsible for the development of masculine characteristics like facial and body hair, lean muscle mass, and erection capabilities. In light of such changes in hormonal status, it’s no wonder why many aging women start to observe the presence of miscellaneous facial and body hair, and also tend to experience sudden increases in sex drive.

Unfortunately, this menopause-related testosterone predominance is also associated with increases in the accumulation of what’s called visceral fat. This type of fat lies deep in the belly region behind the abdominal muscles.

So, essentially, as women age, excess body fat starts to shift away from the hips and thighs to the belly area. This process generally occurs around the age of 40 but can also occur as early as the 30s. As a result women begin to appear more apple-shaped, tending to carry excess body fat in the midsection.

Related Article: What It Means to Have an Apple-Shaped Body

But, it doesn’t stop there!

Changes in the metabolic rate also occur simultaneously making it that much easier for belly fat accumulation to occur.

Slowing of the Metabolic Rate

The metabolic rate (or simply metabolism) is the rate at which the body inherently burns calories to fuel vital functions (breathing, blood pressure, and brain activity). Metabolism is generally influenced by factors like height, weight, and physical activity levels. It’s also naturally lower in women compared to men, though there’s a natural decline in both sexes during aging.

This is why many women (and men) who were naturally thin during childhood and early adulthood (up to 29) begin to notice an appearance of stubborn body fat around the 30-35 year mark. And, this sudden effect tends to be most dramatic among sedentary (physically inactive) people.

Lean body mass refers to any “non-fat” tissues in the body including bone, muscle, organs, blood, and water. Of all components of lean body mass, muscle is the most adaptable to change, which is why I’m going to focus on it here.

Unbeknownst to many, declines in muscle mass generally start in the 30s. As such, it’s much easier for a woman to accumulate excess body fat, even if she were relatively ‘lean’ all her life.

Related Article: The Body Mass Index Versus Body Composition: What You Need to Know

Unfortunately, such declines in muscle mass with aging are inevitable. But, fortunately, the rate at which declines occur is absolutely amenable to exercise, especially resistance training (weight lifting). This is especially important to understand, particularly if you are one of many women who tend to shy away from this type of training out of a fear of becoming too bulky.

So, what does a woman do about this ole belly fat dilemma?

Well, believe it or not, while shifts in hormonal status, slowing of the metabolic rate, and reductions in lean muscle mass are all inevitable effects of the aging process, there’s light at the end of the tunnel. With the right combination of exercise and sensible eating habits before, during and after menopause, women can substantially delay the rate at which these processes occur and, as a result, reduce the amount of belly fat that accumulates.

What’s the right combination of exercise?

Although you can’t selectively choose where you lose body fat, you can choose cardio exercises that thoroughly engage your midsection (jogging or running, swimming, and cardio kickboxing) in order to promote significant reductions in belly fat through core strength development.

I must also emphasize that higher intensities of cardio exercise become increasingly more important with age. In other words, you’ll need to put in some real work for some real results. Many aging women find it difficult to control belly fat, and body fat accumulation in general, because they simply aren’t exercising intensely enough.

Now, compared to cardio exercise, you generally won’t burn as many calories during a typical resistance training session. However, this type of training supports increases in lean muscle mass and greatly boosts the metabolic rate which’ll ultimately lead to increases in calorie burning potential, weight loss and more effective weight management over time.

Another plus of resistance training during aging is that the natural shift to testosterone predominance actually works to a woman’s advantage.

Related Article: An Effective Weight Training Program for Women Over 40

As I mentioned before, testosterone is the dominant hormone in men that allows them to develop more lean muscle mass. Due to elevated levels of testosterone during and after menopause, aging women can greatly maximize muscle mass with weight lifting in ways that give the body a more sleek, firm, yet shapely appearance.

If you don’t believe me, check out the fabulous Ernestine Shepherd, who’s the world’s oldest bodybuilder.

A healthy, well-balanced diet coupled with calorie management is key. Women should regularly consume adequate amounts of calories from all the macronutrients (carbohydrates, fats and proteins), as this helps keep the metabolic rate in check.

It’s especially important for aging women to take in enough high-quality carbohydrates from vegetables and fruits, legumes (beans, peas, and lentils), and whole grain foods along with sizable amounts of healthy fats in the forms of oily fish (salmon, tuna, sardines, trout, and mackerel), nuts and seeds, fatty fruits (olives and avocado) and their oil derivatives (extra-virgin olive oil).

This is especially important if you naturally gain weight easily or are genetically predisposed to having an apple-shape.

So, now you know what’s up with that belly fat that comes with aging. You also know what you can do about it! If you follow the recommendations I’ve provided here, I can almost guarantee you’ll be able to reduce the amount of belly fat you accumulate before, during and after menopause.

Diurnal Fasting: What It Is and Why You Should Try It

How Healthy Lifestyle Behaviors Saved ME From Domestic Abuse 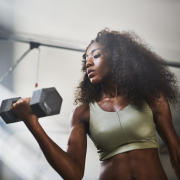 3 Common Myths About Exercise and Diet Among Women, Debunked!