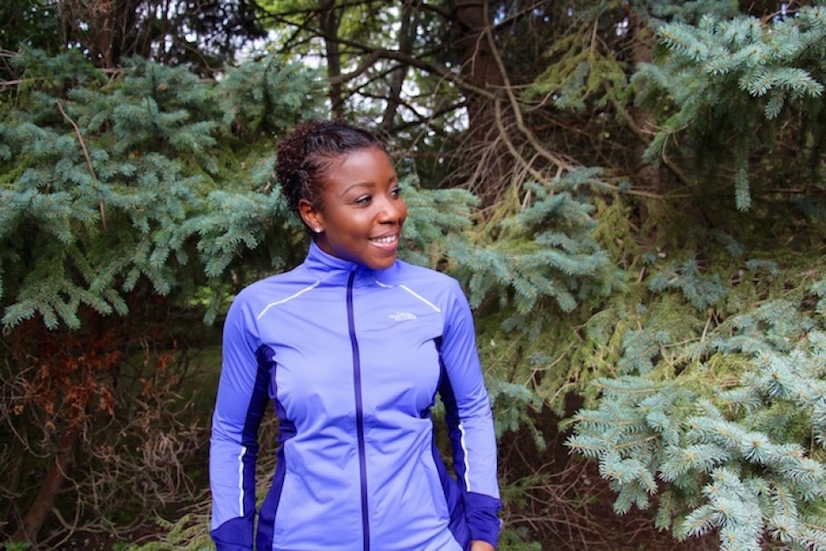 I’ve been an avid runner and marathon enthusiast for nearly 20 years. Long runs on scenic city roads and rural routes and amidst lakes and creeks are definitely my forte. Interestingly enough, I’ve never been a big fan of trail running, particularly in forest environments.

While many runners swear by it, I’m out of my comfort zone here, in “alien” territory.

Trail runs have always made me feel a bit claustrophobic. Perhaps it’s due to the general lack of water availability and bathroom facilities or just an underlying feeling of being trapped in the “wilderness”.

Related Article: Fueling Your Run: What to Eat Before a Race

But, the funny thing is that hiking or biking the trails is a whole different ballgame. I can’t get enough! In both cases, my spiritual connection with the forest environment is almost hypnotic.

There’s just something about the sounds of early morning birdcalls, flowing water from gentle river streams, and wind blowing in the trees that completely consumes me.

Still, in spite of my personal inclinations, I’m always looking for ways to change up my routine. I also like to challenge myself and try new things, especially when it comes to running because the same ole routes tend to get a bit stale after a while.

A while back, I decided to step out of my comfort zone, conquer my hidden fears and give trail running another go.

For the first time in a very long time I became intimidated!

Well, unlike most folks, I didn’t take a baby step!

I decided to run a half marathon trail race as part of The North Face 2015 Endurance Challenge Series, which was held in Madison, Wisconsin on the 4th of October.

When I initially took on this challenge I thought to myself: I can do this, after all, I was scheduled to run the Chicago half marathon just a week prior. In my mind, it was simply an extension of my normal half-marathon training routine—13.1 miles one week and then another 13.1 miles the next, right? Wrong!

Compared to distance road running, doing so on the trails is entirely different. Unlike the well-paved local community trails I’d encountered, trails like those in the Kettle Moraine State Forest, where the Endurance Challenge Series was to be held, are largely comprised of rough, uneven terrain and miles of unpredictable peaks and valleys.

During my first three miles (5K) of training on similar trails I thought to myself, seriously, 13.1 miles in this?

What have I gotten myself into?

So, very early on I had to take off my enthusiast hat and put on my professional one in order to really strategize a way that I could actually take on that thing.

How would I advise a client to get over the intimidation in an efficient, effective, and safe manner?

Well, I would tell them to do everything it takes to prepare for it in advance.

Following my own advice, the first step for me was getting the perfect pair of trail running shoes.

Now, I owned about a dozen pairs of road running shoes but they weren’t at all built for trails, as they lacked adequate support. When it comes to trail running, wearing the wrong shoes can lead to unnecessary injury by placing undue stress on the joints and the muscles that surround them.

Trail running shoes have stiff, thick rubber soles with deep indentations and very aggressive tread patterns, which are generally needed for improved traction and stability on rugged terrain. The soles also have hidden plates for added protection and shielding toe counters on the tips to prevent toe injuries. 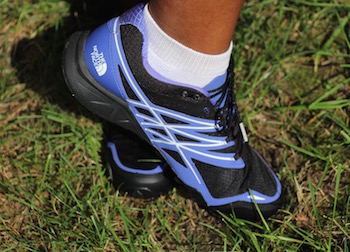 I trained with ULTRA MT trail running shoes made by The North Face. In addition to being incredibly stylish, these shoes were comfortable, well-padded and very lightweight, making it that much easier for me to effectively run the trails at a relatively efficient pace.

These shoes offered Vibram® Megagrip outsoles with supreme traction designed to keep the feet close to the ground. They also had enhanced upper support with Ultra Airmesh that provided a great deal of breathability and flexibility.

Most important for me, the ULTRA MT trail running shoes had good arch support!

I have extremely high arches and have a tendency to “underpronate” when I run, which essentially means that with every stride the outside edge of my foot always hits the ground first.

With the right pair of trail running shoes, the remainder of my focus was primarily on form, technique, and strategy.

In the beginning, trail running was way more exhaustive than road running and would sometimes take me twice as long to complete the same distance. This was not the best confidence booster for me, as I’ve always considered myself to be pretty fit.

I walked a lot more during my “runs”, particularly when I encountered steep hills and bumpy terrain. While it got better over time, I definitely had a long way to go. Therefore, I just stayed focused on finishing without injuring myself in the process.

But, I’d be remiss if I didn’t admit that it was somewhat of a blow to my ego when I found myself constantly getting passed by the vets. That feeling didn’t last long though. Trail running introduced a whole other set of obstacles like rocks and tree roots that warranted my full attention.

Instead of focusing on others, I simply focused on my own pace and running tempo.

When running started to drain my energy levels I walked. The trail running environment definitely requires one to stay in tune with their body. I constantly told myself that it was okay to walk even though it was ‘technically’ a run. Even the vets walked sometimes. When it comes to trail running, proper navigation is way more important than speed.

Since I was training for a half marathon trail race, which was a pretty big leap for a beginner, I made an effort to run the trails at least twice a week with the rest of my running time spent on the roads as usual.

In addition to running, targeted resistance training exercises were a core of my training and they definitely helped!

Unbeknownst to many trail runners and road runners, both novice and experienced, low levels of muscular strength and endurance are silent culprits in the onset of running-related musculoskeletal injuries.

This is primarily because so many runners don’t lift weights or incorporate any type of resistance training into their routines. To be honest, this is where my strength as a runner has always resided. While, I’ve never been the fastest runner, I’ve always been able to go for hours and hours at a time without muscle fatigue and I’ve never had so much as a minor shin splint!

Not only does resistance training enhance strength and endurance for injury reduction but it also promotes proper posture, balance and joint stability in ways that reduce the overall energy cost of running.

This is a huge plus when it comes to trail running. The ever-changing nature of trails requires a good sense of balance and proprioception, which is basically your bodily awareness and overall ability to coordinate your movement patterns with environmental cues.

I can personally attest that this is a critical skill!

In less than a quarter of a mile of my initial trail run, I had to dodge tree roots and hanging branches, large muddy water puddles, and even small snakes, chipmunks, and other animals. This stuff rarely happens on the roads! More muscle use is needed, which inherently poses more of a challenge to the lower body ligaments and joints.

In order to maintain adequate levels of muscular strength and endurance for maximum performance and injury risk reduction during training, I regularly performed exercises like deadlifts, lunges, squats, step-ups, side lunges, and planks.

I typically executed these exercises with moderate loads and a relatively high number of repetitions (12-20) with weights  sufficient enough to fully fatigue my muscles. I also carried out my normal upper body resistance training routine to keep my program well-balanced. 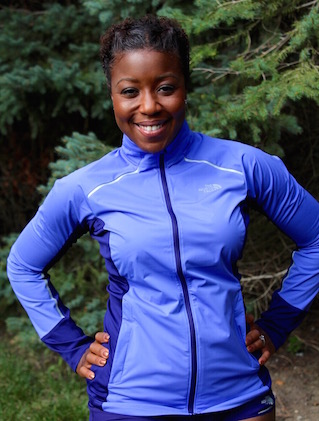 At the end of the day, I had come a long way in training for my first half marathon trail race but my personal quest to conquer the intimidation was FAR from over. I still had to run the race and finish it within four hours! But, despite my underlying feelings of fear and the otherwise unknown, I was definitely much more prepared than I was before.

For the first time ever, trail running also started to offer the same sense of oneness with nature that I got during hikes and bike rides. Plus, the simple act of breathing in fresh air and phytonicides from forest trees instead of exhaust fumes and stinky road kill was much more of a pleasant experience.

Related Article: A Personal Endurance Challenge: How I Survived My First Trail Race

Fueling Your Run: What to Eat Before a Race

Five Foods That Stop Running-Induced Muscle Cramps Before They Start 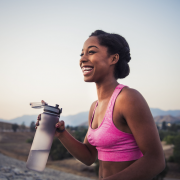 5 Tips for Getting Energized and Motivated to Work Out

Getting Off the Couch and Into a 5K 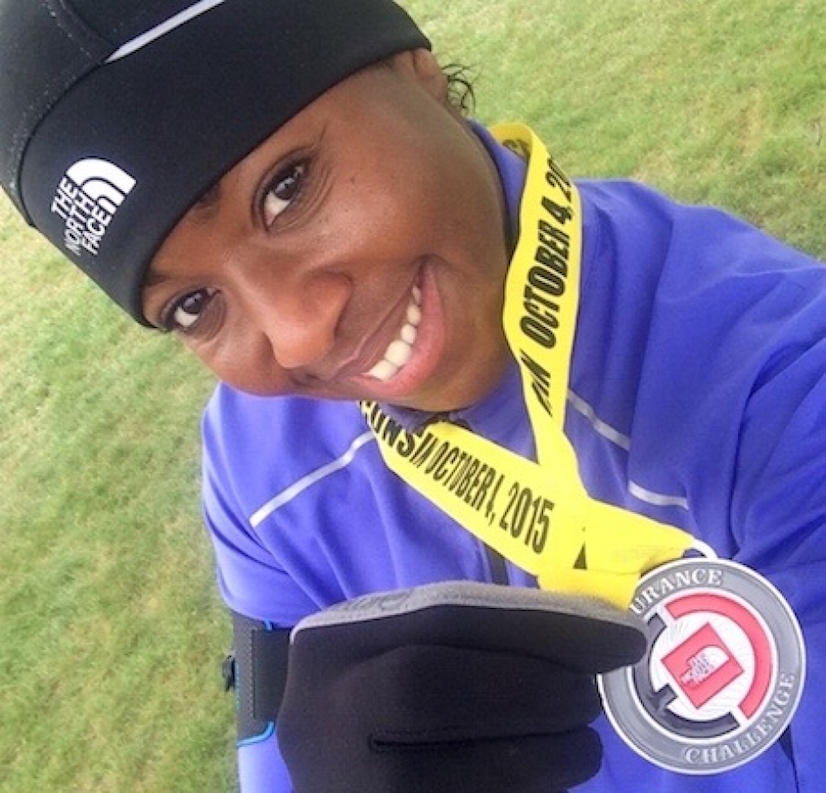