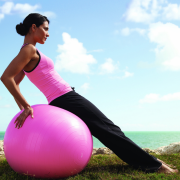 So Now We're Shaming People for Approaching Fitness While 'Fat'?

Couch Potatoes Don't Have A Long Shelf Life: Get Up and Do Something